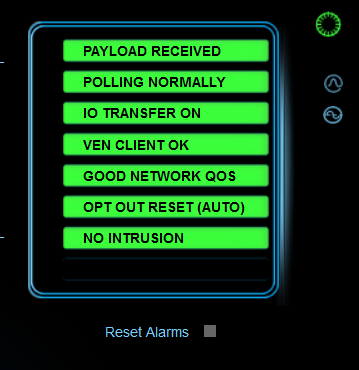 The Alarm Display gives the user an instant indication of important Alarm Conditions.

The Online indicator in the upper right shows the connection status.

If Offline then the Alarms indicate the last condition prior to going Offline.

This indicates if the last payload received from the VTN was received and parsed successfully. If unsuccessful then the Alarm will display POLLING VTN which means it is retrying.

A successful parse will be recorded as a 1 and unsuccessful as a 0 in the DRAS_READ register at 1 minute intervals.

An unsuccessful parse does not indicate a loss of connection to the VTN until there are 5 sequential failures. Less than 5 could indicate the VTN is not responding within the expected time frame or the network is busy.

The transfer of the VTN signal to the relays has been turned Off thereby isolating the GRIDlink’s relay outputs from the Event. This is normally used when testing the VTN connection but not disrupting the facility’s operation by actually shedding loads.

GRIDlink monitors the OpenADR software to see that it is installed and running correctly. This is continuously logged.

If QOS drops to 5 then a warning is indicated as this is considered Low QOS. It must reach 0 or missed the last 10 parses before a loss of VTN connection is declared. Read more here …

When configured for KYZ Pulse inputs, this Alarm monitors changes in the pulse count to let the user know if there has been no activity.

This monitors and logs all reboots to the system. This can indicate tampering when used with the DOOR OPENED Alarm or a faulty power supply or AC power source.

If the GRIDlink enclosure is fitted with a door switch and wired to the proper DI terminal, all entries to the panel will be recorded. The Alarm indicator will remain On until it is reset.